Walking in the snow

Hear the latest adventures with Sophie and Milos..

This is posted on another blog - where I am playing around with more podcasts. Click to try it out. You may need to wait a few moments after clicking the arrow on the box.
Sharon


sharon_betts podcast
Posted by Sharon at 1:23 PM No comments: Links to this post

Went for a walk today. click the arrow to hear how it went.

sharon_betts snow leonbergers
Posted by Sharon at 1:07 PM No comments: Links to this post 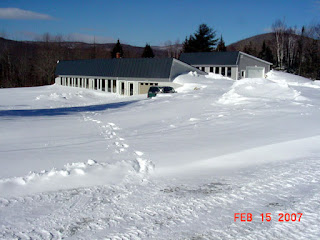 10 degrees outside - 82 inside and no fire since yesterday morning (no furnace either of course) :)
But there is finally some snow - Last week we got around 2 feet (last night another inch or so). It then decided to blow like it was tornado season and drifted everything everywhere with temperatures remaining in the single digits. I can recall such nice soft snows when I was a kid with the sledding hills and cross country trails just perfect. This is impossible to even walk through.
Yesterday, it warmed up to the 20s and I got all dressed up with Dave's snowshoes (since they are longer than mine). Got the dogs and headed back to one of the trails. There hadn't been any snowmobiles down it yet (we were wondering why). I found out.

The texture of the snow and the blowing had made it over 2 feet deep with no crust. The snow shoes sunk down about 10 inches and were nearly impossible to pull out. Then because they were too big, they would turn sideways further inhibiting my progress. The dogs bellies were dragging and Sophie just can't haul her carcass through that much drag anymore.

I decided that the snow shoes weren't doing any good - sat down and got them up out of the snow and off my feet. Milos thought this was interesting and proceeded to kiss me and try to roll around too. Finally got him to sit and thought I would get up - mistake. Did you ever try to get up when your hands sunk up to the shoulder? Put a foot down and it sunk above the knee - now what. Such a funny situation that I started to chuckle - this brought on more cavorting by Milos and Sophie and eventually more cold kisses. Idea - put the snow shoes on the snow - put my hands on them to get enough oomph to push to standing. Then trudge back to the tracks I had left - get the snow shoes back on (in a standing position) and return to the driveway. 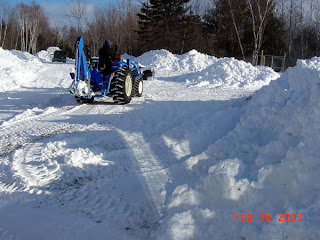 All said, this walk took about 10 - 15 minutes and lasted about 100 feet. Back to the house - all three completely exhausted (ha). Now, I know why there were no snow mobiles -- they also would have sunk and gotten stuck. That must be why the groom the trails......

I am going to try something new. I will be podcasting my postings from now on and also spending some time recording the older ones. Enjoy by clicking on the title.
Posted by Sharon at 4:12 PM No comments: Links to this post