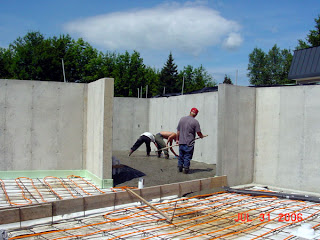 The trucks started rolling in around 8:30 today - and 45 yards of concrete later, we have a floor. The house is completed, but they plan on pouring the attached garage floor on Thursday. We ended up going with 8 inches due to the need to cover all the paraphanalia that is incorportated into this slab.
Stone, 2 sheets of black plastic, 2 layers of styrofoam, rebar (on 2 inch chairs), the PEX tubing -- and then we placed styrofoam around the concrete walls to separate the floor from them and thus deter heat loss.
The pour went well - the last load was a bit wet, and the concrete crew is presently working to make certain that ends up the way we want it. Dave was in the middle of the job allong with 5 others.
The garage siding (on the detached building) was also making major steps today and is nearly completed -- gray siding with white trim. All are documented in our Gallery. It was great to be home and see all the progress. I still can't believe we are on the move. As a matter of fact, the contractor left to order some lumber and we should see a start on the south wall framing next week.
Progress is sweet.
Posted by Sharon at 3:21 PM No comments:

Long time - no postings. We had a delay with the progress on the slab the last week or so. Finally, Dave ended up laying the rebar himself (with the help of a neighbor teenager). Today, we had the heating contractors and they have the radiant heating tubes (PEX tubing) nearly finished. I meant to put a link on the previous post for information on the Slab-Shield we used. But forgot so check out this site if you are interested. We read alot on radiant heat and PEX was most accepted as the best material for the slab. Cross-linked Polyethylene.
There are a few more pictures in the Gallery - and check out Dave's wall.

So, now if we can just get the rebar chairs to lift the rebar above the slab shield, we can POUR THE FLOOR!!! Stay tuned. 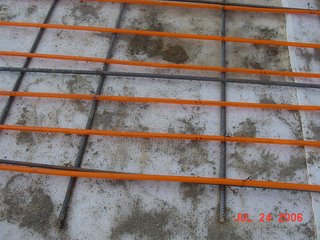 Posted by Sharon at 7:59 PM No comments:

We are spending a lot of preparation time on the floors and walls. If you want to live in a bermed house, you need to insulate yourself in all the correct places. So, the concrete is first covered with two layers of heavy black plastic, followed by two layers of styrofoam. 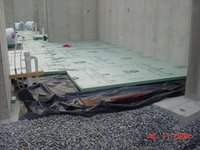 After major plumbing lines are in place, the floor is covered with stone, two layers of plastic, the styrofoam and then Slab Shield. After that, we call the concrete team back for the rebar before the heating contractors come to lay the radiant heating piping. WHEW. Documentation with pictures in the Gallery.
Posted by Sharon at 9:48 PM No comments:

Last week, I was off to San Diego (a beautiful city, by the way) for the National Educational Computer Conference. I was set to leave at 4 am from the lot as my flight was out of Portland at 7:30. It was July 3rd and fireworks were scheduled for that night at a farmer's field just above our place - we were planning on watching from the comfort of our armchairs. I had just returned from a hike with the dogs and fed them for the night. They were resting quietly when the "Nose" got a whif of something else on four legs. I feared that pesky porcupine, but now believe it was a deer.

Off he went - no shouts (or threats) penetrated that big head. Into the woods around one of the brush piles. I took off after him with visions of bogs and spines in my head. Dave headed around the pile the other way. Bouncing like a kangaroo with his nose in the air -- deeper into the woods. Now, it is July and you can only see about 10 feet past the lanes with all the moisture this year. I called, Dave called; even Sophie whined - but the boy was on another adventure.

And the search began -- we drove up and down the road looking for traces and calling his name. The traffic was heavy due to those fireworks and I feared that if he did head across the road, he would either be hit or picked up. No Milos. Back to the lot and after a mosquito spray shower, into the woods. We walked, called, and whistled for another 1/2 hour -- No Milos. Back into the van for Sophie and me and up and down the road several more times. Dave jumped on his tractor and started up and down all the paths. Remember we have 140 acres and to the north and west the trees go on forever over the foothills. Was it a moose? a deer? or a skunk (I guess we would know that by now).

Darkness was falling and No Milos. I drove the van back to the log landing and parked -- wandered around until Dave came out of the last lane and we pow-wowed. Finally decided that I would contact the animal control officer, but not much else we could do. I couldn't imagine leaving the next morning without knowing..... Turned back to the van and -- There's Milos. I didn't have the camera, but he had obviously had a party in the old beaver bog. I'll leave his appearance to your imagination -- but he was back.

Since, he has only known the end of the leash and his pen. Wonder how those bird dog training devices work?

Oh, the conference was marvelous - I even blogged it for both eSchool News and ISTE (International Society of Technology Educators - the sponsors). If you are into technology and schools, you can read the entries by clicking on the titles.
Posted by Sharon at 6:24 AM 3 comments: 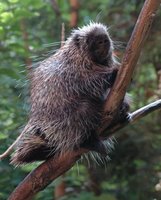 Yep, we ended the day with an encounter of the worst kind.... (from Wikipedia) Porcupines are rodents best known for their coat of sharp spines, or quills, that defend them from predators. The porcupines include the fourth largest rodent, after the capybara, mara, and beaver,

Think he looks cute? - try him from a foot away with quills a shaking and Milos barking in complete abandon with no idea of what is to come. I thought he was after a chipmunk when he took off down the lane - but chipmunks don't usually head into the swampy, overgrown, rocky part of the lot with no access -- or it didn't have access until now. It soon became obvious from the frantic yelps and growls that this was no chipmunk.

So, off I went through the brush and brine to find my "boy" in a standoff with a very large male porcupine. I screamed - and I mean screamed No everytime Milos made a lunge/ This histerical screaming seemed to deter him just a bit. I really think he thought I was cheering him on. Here I am trying to grab his collar and miss the tail myself. We are all three working around a small tree in the muck and mud with large rocks and brush (including blackberry briars). Finally, I managed to lunge and get his collar landing on my belly with the porcupine about a foot away from us both. Milos was out of control - and I held on with both hands. Thank goodness, Mr. Porci was thrilled to have this maniac long haired idiot under minimal control and ambled back deeper into the muck and goo. The slow disappearance of this unusual toy, gave Milos his second wind just as I was starting to get up and find a footing. Back on my belly with arms outstretched and uttering threats of slow death for my previously loved pup, I got him stopped and finally he realized that Mom was hanging off his collar and she seemed to be a bit upset.

He did a double take after the disappearing needle-ball, deciding I was not going to release him for anything (I think I could do pretty well in a rodeo after this). He decided to settle a bit and come with me and we thrashed our way back to the path.

No harm to the porcupine except for a thrill of the night -
I lost my work glasses - never to be found again in that mess. Milos had a handfull of quills in his nose and snout. I immediately pulled as many as I could with my fingers as I know they expand more as the warm in the body.

Then flagged down Dave who was working on the tractor for some help. We managed to extract them all with only a minimal of blood. Neither dog is going off leash for awhile -----
A day on the homestead.
Posted by Sharon at 8:39 PM 1 comment: