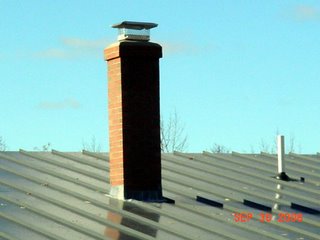 and the garage door installed. I am enthralled with the chimney cap and haven't figured out what it really looks like though. The garage door is one of the better insulated models which meant there wasn't much color choice. We went with a sand which should blend in nicely.

Next week will see more of the plaster / wallboard crew. They have the board pretty much up (much of it is cement board as we are plastering alot). I need to do some documenting on that before they cover it all up.

Haven't had any strange visitors since the moose came by last week one day. The dogs went crazy in their pen and one of the workers looked down the lane and saw a bull moose over-looking the construction. I'll bet they wonder what in the world we are trying to accomplish. I took a couple of shots from his position and it is a nice view.
Check out the new entries in the Gallery. 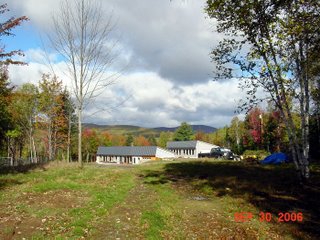 It's the little things

Haven't posted on the house for awhile -- the interlude of leonberger poetry should make you smile though. 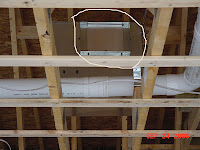 We have been working on those pesty inside things: electricity, plumbing, chimney, circulation fans, catwalks and insulation. Not very pretty for pictures, but important for comfort later. Here is an update:
We bought and installed in the rafters a rangehood exhaust fan. Now, I think it is a good thing we have big dogs and no cats because this baby should suck up small animals with no problem. The RangeMaster 11oo cfm fan. It is so large, it had to go up the chimney opening as it won't go through the trusses.

The electrician is finished until the walls are covered. We are having most of them plastered since we have those concrete ones to work with. The plasterers are scheduled to arrive this week sometime. Dave has placed insulation in most of the interior walls. We did that between bedrooms in Wells and found it to be a life saver for sound deadening. So, we went the entire way this time.

The chimney is up to the roof and ready to go through -- if the weather dries out, that will happen tomorrow or Tuesday. It looks good and finally I can see exactly how it works into the floorplan.

No air conditioning -- but we have 3 whole house fans. The switch panel is going to look like StarTrek command, but should move some air. Of course, the bathroom fans, dryer vent and attic fans (one at each end of the house) also all needed to be ready before the plastering. The plumber is coming tomorrow to finish all those connections and we still have some work to be done on the radiant heating system. The pipes and water heater are in place, some manifolds still need to be connected. This should also take place this week.

The concrete walls are not as tall as our ceilings (8 1/2 feet). So, there is framing above each of them. For now, we are having these covered with plaster board and plaster. I am afraid they might crack with settling -- we have plans for decorative wood in case that happens. Also, we are planning several wood walls which won't be finished on move-in. Some ceilings are also going to be wood, these will be covered with wallboard for now. Have to be able to blow in the insulation before winter. 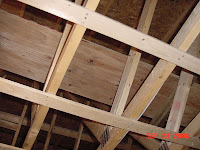 Dave built numerous catwalks in the attic / truss space. With deep insulation, that was the only way to traverse that space if any of the above mentioned fans give us trouble.

I saw the kitchen cabinets (the varigated hickory was a good idea and they are coming along well). The appliances are ordered for delivery on or about Oct. 10th. Soon my weekly laundramat visits will end!
So - the little things have been keeping us busy. I'll post more later.
Posted by Sharon at 2:41 PM No comments: 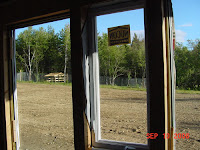 Friday they placed the windows and exterior doors. And Saturday Ryan and Robyn came to visit - along with Banjo, their cute labradoodle. We had a beautiful weekend with just a few Saturday night showers. And best of all -- they were the first to sleep in the new house. Of course they did so on air mattresses and sleeping bags. Banjo used the exercise pen and Milos's bed. They said it was a great place to wake up with light streaming in the new windows. Thank goodness for an understanding family.
The view is out our bedroom.
Posted by Sharon at 8:05 PM No comments:

Windows are for watching

Through a window I watch, windows are For watching - Square pieces of life Ever changing. ~Donovan Holtz
Yes, we have windows. The shorter ones are casement and open for ventilation. The larger ones are simply sliding door replacement glass which seems to be the best for passive solar installations like ours. We also have exterior doors. You can see the front door about 1/3 of the way from the right side.
Posted by Sharon at 7:54 PM No comments:

Adventures with 2 Leos in the Maine Woods

Episode 5 -
A beautiful evening with a crescent moon and a sky full of stars. Dave is off to town for groceries, I am reading my favorite weblogs and the dogs are resting peacefully on the floor beside me - a cool breeze wafts in the screen door.
A twitch of a nose and a flip of an ear - out through the screen and down the lane after an intruder. We are off on another Milos adventure - What will it be I wonder as I scramble into my shoes, grab the leashes and flashlight and join the chase. There are so many options (and not many welcome):
Our friend, Porcy (episode 1); the ever present deer (episode 2); Feisty Fox or Mangy Moose (episode 3) - probably not the quail or turkeys (episode 4) as they usually sleep at night. Which is something good leonbergers should do also.
Perhaps a new neighbor. The roofer had a black bear run across in front of him on Wednesday am just down the road, not so sure I want to greet him in the trees; there is that skunk that leaves a hint of his presence every week or so on the wind, I know I don't want to meet him in the trees.

By this time I can hear the chase in the brush - thank goodness it isn't wet and there are few briars this time. Into the depths of the Maine night I plunge - follow the sounds - follow the dogs (again). A glance of Milos just ahead. My lucky night - he lost the scent and is doubling back to pick it up. Instead I pick him up. At least he is contrite this time - goes willingly on the leash. No Sophie to be seen or heard, but she will find me -- I only worry about the skunk....
So, back to the trailer. UH OH -- flash the light ahead -trees, flash the light behind - trees, flash the light up -branches and stars. Listen - why didn't I have the radio on? silence.
That trailer has to be close, I only was on the hunt for about 10 minutes. But, which way? Do I have to wait for Dave and in embarassment call for him to direct me back?
Anything but that - these jaunts of mine with my dogs are becoming a great topic of fun and I don't want to add to the events.
So, head first into the trees with Milos in tow -- then, there is Sophie and she heads passively through the trees. I follow her and in just a few feet come out on our well trodden path.
Episode over -- wish I knew which friend we were trying to greet.... resting up - you never know when opportunity may knock:
Posted by Sharon at 3:49 PM No comments:

Had an interesting day Wednesday - started with a helicopter hovering around the lot. It was black and obviously not a "life flight" waiting for a roofing accident, ha. After a time of speculation, Dave had to go to town for some errands and left the workers on site.

When he returned, it was to a lot of "ribbing" - seems that two ATV's arrived from the back of the lot down our trails. Now this isn't that unusual in rural Maine. But, the piles of marijuana that were strapped to their machines were!!

Yep, the DEA -- wondering who and where the landowner was. Now, I didn't see their haul -- but the reports are very large lush mature plants -- which had obviously been tended. The agents said they would be back, but we haven't seen them since. I kinda hope they do as we would like to know just where this "farming" was going on.... Perhaps those cars that drive up the lane and turn around aren't just young-love.

Marijuana, locally grown and imported from Canada, Massachusetts, and New York, remains the primary drug of abuse in Maine. quote from http://www.dea.gov/pubs/states/maine.html
Posted by Sharon at 7:20 PM 1 comment: