Beautiful day with daisies blooming everywhere, mosquitoes singing in the woods, sun shining and a slight breeze. Dave has the plumbing runs covered and is working on evening out the drainage area in front of the frost wall. The general contractor is on a short vacation until after July 4th - so, plumbing is about all that will be worked on. No new pictures.
I took the dogs on a long hike this morning - noticed ATV tracks along some of our paths. We don't care if they use our main trail to pass through our lot as it has been a major thoroughfare for neighbors a long time before we arrived. We don't want to make an ATV park though and may post some "friendly" signs here and there. The animals are our biggest concern - moose, beaver, deer, hare, skunks, porcupine, turkeys, quail, coyote, and even a possibility of black bear are just a few that we share the area with - and we want to keep them as natural as possible. Last week, I even saw a turtle on the main log landing. It is the time of year that the females move around. Two weeks ago it was a beaver that came face to face with us at the old bog. That was a young male trying to find his new home. I wonder where he ended up? We also have run into quite alot of deer and scat from lots of other animals, but I haven't yet seen a moose. They leave tracks everywhere -- Dave had one come directly through the lot while both dogs were out. He said Sophie headed for the trailer and Milos wanted to chase it -- he had both their collars and was nearly pulled in two. Wish I could have seen that one.
So, everything is as it should be on the homestead.
Technorati Tags: solar
Posted by Sharon at 10:40 AM No comments: Links to this post 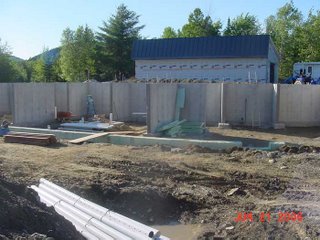 The concrete forms on the walls are finally gone. Today, the plumber worked (along with Dave and Ken, the general contractor). Having a concrete floor and walls means alot of planning and a slab full of "stuff". We have decided on the drainage now -- they cast 'weep' drains into the frost wall and will have a perimeter system carrying away any accumlating water. The excavator said today that it is actually possible the water will find another way over the years and become completly dry. Dave is also putting a back-up sump pump system in just in case. Those years of waking up to floating shoes and socks when he was a teen ager in Bowling Green, Ohio certainly taught him to be careful.
I will try to get a few pictures of the inside of the walls tomorrow night - although I have an appointment with the cabinet maker to finalize the kitchen (much more fun that pipes and drains).
And there is more good news -- we finally have a working phone. We had a two phone system in our previous house and it works here. The base unit is in the garage and the extension sitting in the trailer -- I just talked to my mother and it worked great. I'm excited. Internet and phone - what's next? The dogs are having a great time watching the construction project. Milos is quite impressed with the speed of earth moving going on.
Posted by Sharon at 8:40 PM No comments: Links to this post

Finally some progress. We got the water tests back and everything was within standards. The manganese is right on acceptable and iron is about 50% of acceptable. However, it is actually very soft which is a strange combination to me. We will probably put a filter on, but at least we don't have to worry about radon or arsenic (very expensive to clean). So, another hurdle crossed.
And 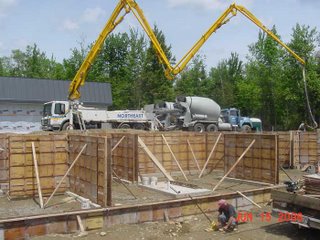 -- we have walls!! They poured using a pump truck (there are pictures in the Gallery) -- it took 6 trucks to finish the job. It is strange to look out front and see the shape of actual rooms. Some of the forms are already off and I imagine the rest will go this weekend.
Notice the plastic pipes sticking out around the top. We were trying to figure out how to wire on concrete when someone suggested casting the boxes in the concrete. So each of those pipes is an electrical box. Hope they all managed to stay intact. Dave is working his way around the inside "sanding" off the bumps as we hope to plaster most walls. As he says, "innies" are ok - but "outties" just would look dumb. One of the concrete workers suggested a masonry file (or something). It works very well.

So, things are happening -- still no phone, but I won't go down that road as I am feeling pretty good tonight. I am off to a conference Sun - Tues (I will come home at night) and then flying to San Diego on July 3rd - July 7th to present at another one. So, postings may continue to be far between.
Posted by Sharon at 7:46 PM 1 comment: Links to this post